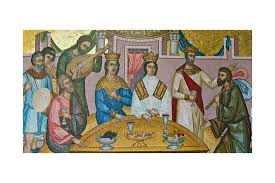 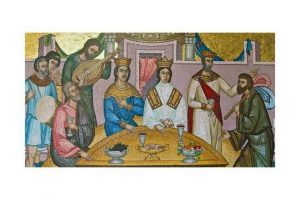 Wedding of Alexios I Comnenus and Irene Ducaena

A few years back Jared Diamond wrote a best-selling book, “Guns, Germs, & Steel” which tried to explain trends in global history. Like many others, I found his observations to be enlightening, if sometimes flawed. He recently came out with a new book, “Upheaval – Turning Points for Nations in Crisis”. This book tries to explain how some countries have most effectively dealt with national crises.

I encountered a review of the book in the Wall Street Journal (June 15-16, 2019, p. C7, by Brendan Simms). I wondered if Professor Diamond might include a reference to some of the pivotal crisis points in Byzantine history. Alas, the review does not indicate that Byzantine history’s many upheavals were examples the author discussed in this new book.

The reviewer, though, boiled down to four points (from the twelve the author listed) what the book says a country’s leadership must do when faced with a crisis. In looking them over, I tried to compare them to the pivotal time (1081) when Alexios I Comnenus seized the Byzantine throne and became emperor. The points seemed to fit well with my understanding about how Alexios Comnenus dealt with that terrible time.

“Acknowledgement that one is in a crisis.”

It would have been difficult to avoid noticing that the Byzantine Empire in 1081 (when Alexios I Comnenus became emperor) was in crisis. The Turks had swarmed over Anatolia, acquiring that rich territory in the ten years following the terrible defeat at Manzikert. There was the Norman mercenary Robert Guiscard who thought he and his army could seize the empire and enthrone himself as emperor. And the Pechenegs were a perennial thorn in the empire’s side and on the move. On top of all the external threats was an imperial treasury that was basically empty due to a string of profligate and incompetent rulers.

“Accept responsibility rather than scapegoating”

Alexios had little choice in this matter. He was emperor and the barbarians were almost at the city’s gates. He did not have a minute to waste complaining about the fools who had pushed the empire into this morass. In addition, his wife came from the Ducas family whose political machinations were to blame for many of their problems. So best not to complain too much about it.

Alexios was in his mid-20’s when he became emperor. He had been a gifted and energetic military leader since his teens. His first major battle as emperor was against Robert Guiscard, a seasoned and successful warrior thirty years his senior. Unfortunately, this battle at Dyrrachium was a terrible and humiliating defeat for the Byzantines that Alexios barely survived. He returned to Constantinople and regrouped, realizing that he was not capable of defeating the Norman militarily. At least, not yet.

Instead, Alexios turned to the sophisticated diplomatic maneuvers that the Byzantines had used for generations. He sent what gold he had to the Holy Roman Emperor as payment for attacking Guiscard’s Italian holdings. He sent a disaffected Guiscard relative who had landed in the Byzantine court back to Italy to stir up more trouble. Soon Guiscard returned to Italy to protect his valuable holdings there. Alexios gained the breathing room he needed for several years to rebuild his armies and his finances.

The Byzantine Empire identified itself as much by its Orthodox religion as it did by any political distinction. Alexios recognized this from the start of his reign. During the rebellion that led to his becoming emperor, some of his soldiers rampaged through Constantinople, pillaging what they could from its citizens. The outraged patriarch demanded that Alexios do penance for his soldiers’ terrible actions. The new emperor did so by wearing sackcloth for 40 days and sleeping on the ground with a stone for a pillow.

Later, the empire’s dreadful financial situation became especially bad. Alexios and his chief advisor, his mother Anna Dalassena, came up with the solution of confiscating gold from the empire’s monasteries. Anna Dalassena had watched a quarter century earlier when Alexios’ uncle, the Emperor Isaac I Comnenus, tried the same thing. The result was a catastrophe due to an unwilling patriarch, which contributed to Isaac’s ultimate abdication. Anna did not want her son to experience that same kind of turmoil. Fortunately, she had had the foresight to install a new patriarch who was a friend to the Comnenus family. The compliant patriarch made no complaints when Anna and Alexios made the same request that Isaac had made.

Jared Diamond’s points about how to effectively deal with a crisis seem spot on when looking at the reign of Alexios I Comnenus and how he addressed one of the Byzantine Empire’s worst crises. It is just unfortunate that Byzantine history is not more widely known and appreciated for this and the many other lessons it can teach.