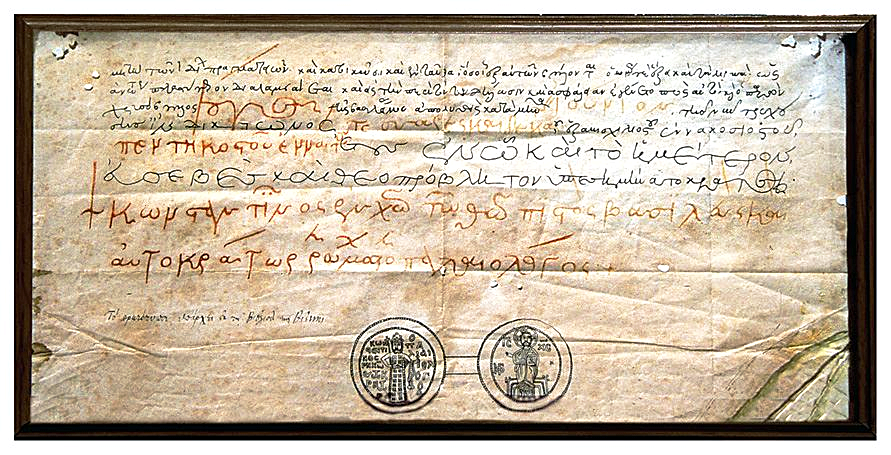 Growth in the Use of Surnames

The use of surnames only became necessary as populations grew and groups of people no longer lived in close-knit villages . That was the situation in ancient Rome when the population grew to over one million at its height. A few individuals used surnames in the Eastern Roman Empire throughout its history. However, their use increased as the population of Constantinople grew, particularly around 1000. How the individual chose his surname remained fluid for many years. It often referred back to the area or town where the family originated, or from a family profession or trait.

Many medieval Byzantines did not use a surname. The father of my heroine, Anna Dalassena, was Alexios “Charon.” He earned that sobriquet because of his ability to send enemy warriors to their death. Otherwise, he had no surname. We have no records of surnames for several emperors who arose from the peasant class, including Basil I, Michael IV, and Michael V.

Anna Dalassena chose her grandfather’s surname, Dalassena (the feminine version of Dalassenus) as her surname. Her grandfather’s family produced many respected generals for the empire. Most notable was Constantine Dalassenus who came close to marrying Empress Zoe twice. Constantine Ducas, Anna Dalassena’s hated nemesis, took his maternal grandfather’s surname of Ducas (from the Latin – dux, leader). Leaders and generals in the Eastern Roman Empire for centuries, the Ducas family male line ended with the execution of a Ducas rebel in the 10th century. The Ducas name would have died out if Constantine and his brother John had not adopted it.

By the 12th century, many members of the dynatoi had a string of three or four family names that showed off a person’s family connections. Or a person might chose a beloved grandparent’s last name. Anna Comnena, the great historian, named her daughter Irene after her own mother. Young Irene chose grandmother Irene’s last name, Ducaena (the feminine form of Ducas) as her last name. It seems odd that she would decided against using her father’s name, Bryennios, or her mother’s (ruling) family name of Comnena. Maybe she got a bit more in her grandmother’s will after doing that?

First name conventions seemed to follow certain patterns as well. Boys’ names were from their paternal grandfather, paternal uncles, maternal grandfather, maternal uncles, other male relations. Fathers do not seem to have often named a son after himself. Perhaps if the family ran out of other male relatives. Constantine X Ducas finally named his third son after himself after first having a Michael (possibly named after his maternal uncle, the Patriarch Michael Keroularios) and an Andronikos (named after Constantine X’s father).

Manuel Comnenus, a general loyal to Basil II, had two sons, Isaac I Comnenus and John Comnenus. Each of his sons named their first-born son Manuel. Both of the sons also had daughters named Marie. John named his other sons Isaac (after his older brother), Alexios (after his father-in-law), Adrian (after his wife’s grandfather), and Nikephoros (after an older brother who died young).

There are three men in the history books named Nikephoros Bryennios (all three of whom had notable interactions with the Comneni, as I mentioned in an earlier blog: https://eileenstephenson.com/the-three-nikephoros-bryennios-ever-in-the-shadow-of-the-comneni/). My guess is that the first Nikephoros Bryennios (blinded when caught rebelling) was the grandfather of the third one who married Anna Comnena about 60 years later. The second one was likely a nephew of the first one, and so a second cousin of the third one.

Girls names followed a similar pattern, chosen to remember mothers, grandmothers, aunts, etc. However, since the names of many women never made it into the history books, that is less clear.