I recently read a book about the city of Paris and the author mentioned that a particular hospital was the “first hospital in Europe”. I had to shake my head at his ignorance of the history of the Byzantines. However, it inspired me to make a list of a few things I know of that the Byzantines did long before the rest of Europe did.

Wealthy individuals first established hospitals, called “xenon” in Constantinople, beginning in the 5th century for charitable reasons. Eventually the state also established some. They were not large establishments with hundreds of beds as in modern hospitals; usually just a dozen or so beds. Often particular xenon became known for treating specific illnesses. They cared for the sick, had physicians on staff, and used their facilities to train young physicians.

Long before Elizabeth Blackwell, female physicians in the Byzantine empire worked in the hospitals there. Management expected them to work twice as many hours as the male physicians, and paid them half as much. Some things never change!

The Byzantines were the first to use forks to eat meals. An example of a Byzantine fork that I saw several a few years ago at the Dumbarton Oaks Museum in Washington, DC. It resembled what we call a cocktail fork – not too long and with two prongs on it (see above photo). A Byzantine princess, Theodora Ducaena (daughter of Constantine X Ducas) brought them with her when she sailed off to marry the Venetian doge (Domenico Selvo) in 1075. The Venetians thought this was ridiculously pretentious, but they caught on. 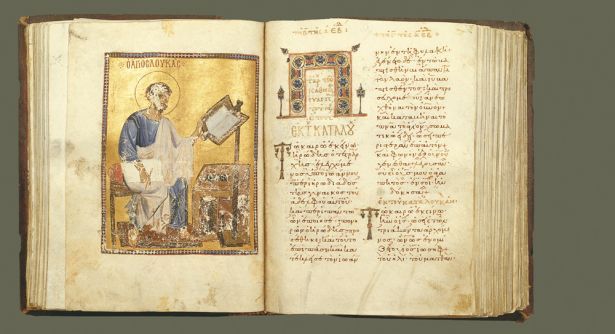 Society in the Eastern Roman Empire highly valued literacy. By the 11th century it was common for men and even women down into the middle classes to read. This level of literacy did not make it into western Europe until perhaps the 18th century.

Constantinople had school of higher education teaching grammar, rhetoric, mathematics, astronomy, law, and music. Some were established as early as the 5th century, others later in the 9th century, long before the University of Bologna was founded in 1088. They were not  comparable to the universities founded later in Italy and France, but were institutions of higher learning. Unfortunately, the devastation the Fourth Crusade in 1204 wrought spelled the end of the Byzantine university.

Europe’s first female historian was none other than Anna Comnena (please see the last story in my book, Tales of Byzantium (www.amazon.com/Tales-Byzantium-Selection-Short-Stories-ebook/dp/B00WTOMJ9A   to learn more about Anna). She was the educated daughter of the Emperor Alexios I Comnenus and her father’s first-born child. He promised her the Byzantine throne at birth, and then denied it later in favor of her younger brother, John. Anna may have felt disappointed at this. However, sad as that may have been for Anna, her legacy as the author of her father’s biography, Alexiad, has far outlasted her brother’s legacy.

These are a sampling of some of the things the Byzantines did first. There are others I could go into such as napalm (known as Greek fire – see earlier blog) and industrial espionage (silk worms smuggled from China by monks during the 6th century reign of Justinian & Theodora), but those are topics for other blogs.