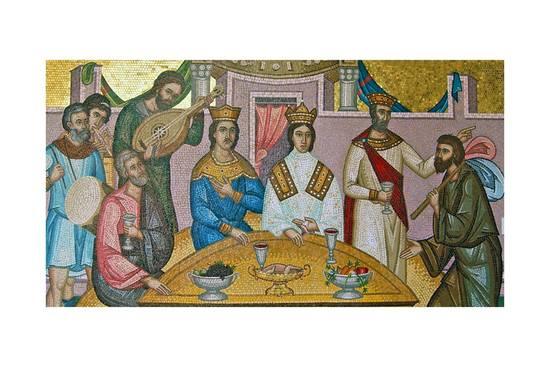 Above: The royal wedding of Alexios I Comnenus and Irene Ducaena.

Irene Ducaena was the wife and empress of Alexios I Comnenus, marrying him shortly after he seized the throne on April 1, 1081. Her daughter, the erudite Anna Comnena, wrote glowingly of her mother in her history, The Alexiad – extolling her beauty, wisdom, and care for her family. Women, even imperial women like Irene, often made no impression on medieval historians. However, the real Irene Ducaena was perhaps a more nuanced woman than her daughter portrayed her.

Marie of Bulgaria gave birth to Irene in 1066. Her father was Andronikos Ducas, the son of John Ducas, the younger brother of Emperor Constantine X Ducas. John’s wife was Irene Pegonitissa, the new baby’s namesake who died the year she was born. Marie of Bulgaria was the granddaughter of a former ruler of Bulgaria and a wealthy heiress. She was also the niece of Isaac I Comnenus’s wife, Catherine. Marie would have been about 16 when her daughter Irene was born.

When Irene was about 5, her father Andronikos played an infamous and devastatingly pivotal role at the Battle of Manzikert. He refused to send the soldiers under his command to back up the Emperor Romanos IV Diogenes against the Turks led by Alp Arslan. As a result, the Turks defeated the emperor, beginning their entrance into Anatolia. In a short time, Romanos had lost his throne, his family, his sight and his life (for more on this unfortunate man, see my blog: https://eileenstephenson.com/the-unlucky-diogenes-family/). Soon the Byzantines lost control of much of Anatolia.

Three years after that, rebel mercenaries led by the Norman, Roussel de Ballieul, captured Andronikos. Ironically, Roussel had been under his command at Manzikert. Roussel released Andronikos, possibly due to ill health, and he returned to Constantinople with the help of the young soldier, Alexios Comnenus, in 1074.

What did eight-year old Irene think of this young man who returned her father to her? The historical record does not record the child’s reaction. But sometime in the next four years Irene and Alexios were betrothed. One has to wonder how this could have occurred given the animosity of Alexios’s mother, Anna Dalassena, toward the Ducas family.

Manzikert alone was enough since Romanos IV Diogenes was a distant cousin of Anna’s, and the father-in-law of one of her daughters. There was also John Ducas’s persecution of her following Rmanos’s overthrow, sending her to imprisonment on Prinkipo Island for about a year. My novel, Imperial Passions – The Porta Aurea, proposes an additional reason for her dislike. (https://www.amazon.com/Imperial-Passions-Porta-Eileen-Stephenson-ebook/dp/B07CMQPDWV)

Had Irene conceived an infatuation for the handsome young soldier and begged her mother to arrange it? Whatever the reason, my guess is that Marie of Bulgaria convinced Anna Dalassena to permit it. By that time Andronikos Ducas had died and her grandfather, John Ducas, would have had little leverage with that matriarch. The betrothal could not have occurred without Anna Dalassena’s approval. Anna and Marie likely knew each other well from their connection with Isaac Comnenus’s wife (Anna Dalassena’s sister-in-law). Marie must have been the one to convince Anna to allow it.

In any event, the betrothal of Alexios and Irene was agreed to. A betrothal in medieval times was more than a modern engagement, but less than a marriage. It was a commitment by both parties to a marriage, and as binding as wedding vows, but without the sex. Betrothals were rarely broken and only for the most dire of circumstances.

However, by 1081 when Irene was 15, no marriage had yet occurred. Alexios had been busy, on campaign. In the spring he rebelled against the almost senile emperor, Nikephoros III Botaneiates. Nikephoros’ beautiful wife, Marie of Alan provided Alexios help. Something appears to have happened between Alexios and the lovely Marie of Alan (considered the world’s most beautiful woman). There are hints in Anna Comnena’s Alexiad indicating that there was a mutual attraction between them, despite Marie being five years older than Alexios. Marie of Alan became a key supporter in Alexios’s successful attempt at the throne.

Anna Dalassena would probably not have objected to her son’s ending the betrothal with Irene Ducaena and his marriage to Marie. The historical record  of her animosity to the Ducas family is unequivocal. The biggest impediment, though, was the Patriarch Cosmas’s objection. He felt that Irene should have been crowned with Alexios. On the other hand, Anna Dalassena wanted Cosmas to retire so that her choice for Patriarch could be named, but Cosmas refused to until after he had seen Irene and Alexios married, and Irene crowned.

Alexios had little choice but to abandon any hopes of marriage to Marie, and to finally wed Irene. Opposing the patriarch’s wishes in this matter would have been supremely foolish. The importance of the patriarch’s support at such a crucial period of regime change was not in doubt. In addition, it cemented the Ducas family’s support of Alexios – John Ducas would not conspire against the man married to his granddaughter!

Alexios and Irene went on to have nine children. During the first fifteen years of his reign, he was almost always on campaign in the warmer months. At that time Alexios left control of civil matters to his mother, Anna Dalassena, never to his wife. Irene may have been empress and wife of the most powerful man in her world, but her mother-in-law ruled the Great Palace and civilian affairs in her husband’s absence.

You might wonder how Irene felt, with a powerful title but subservient to her mother-in-law. Anne likely bore her very little good will. Their relationship was probably not warm. During her husband’s reign, Irene founded the Kecharitomene Monastery in Constantinople. The typikon, the founding document establishing the rules and requirements of the monastery, contains a long list of who the nuns were to pray for. This list included her husband, children, grandchildren, parents, other family relations. It included her father-in-law, John Comnenus who died when she was a baby and probably never met – all of them specifically by name. She also asks for prayers for her husband’s mother, but she does not include Anna Dalassena’s name.

Later, Anna Dalassena retired from the Great Palace in her 70’s. However, Alexios never left Irene with that same level of authority he had left his mother with during his absences from the city. In fact, rather than leave her behind, he insisted she accompany him on campaign to help care for his gout. It is easy to surmise what Alexios thought of his wife’s ability to manage the civil affairs of the empire.

The account of Alexios’s death as recounted in the Alexiad by his daughter, Anna Comnena, describes her mother’s great grief at her husband’s death. The story of this change in power from Alexios to his son, John, has an interesting twist to it.

Irene supposedly wanted her daughter, Anna Comnena and her husband, Nikephoros Bryennios, to rule after Alexios’s death. So far as I have read, Irene was the only medieval empress/queen to seek to have her daughter take the throne rather than her son. I suspect that rather than having proto-feminist reasons, Irene’s motivations were more self-serving. I suspect she hoped to have the same influence and power over Anna and Nikephoros as Anna Dalassena had had over Alexios. She probably knew her son John would not be as amenable. Unfortunately for her and Anna, Bryennios swore an oath of loyalty to John and refused to be a party to his wife’s rebellion. Irene and Anna were soon bundled off to the Kecharitomene Monastery, more or less for the rest of their lives.

The End of the Story

John, the son of Alexios and Irene, was an outstanding emperor – successful in battle and a popular ruler. The educated Anna Comnena received the punishment of confinement to Kechariotmene monastery. There she used her considerable energies to write The Alexiad. She became Europe’s first female historian (I’ve written about this event in Tales of Byzantium). (https://www.amazon.com/Tales-Byzantium-Selection-Short-Stories-ebook/dp/B00WTOMJ9A) Perhaps we should be grateful for Irene’s fruitless quest for power since without it we might never have had the benefit of Anna Comnena’s fine history.