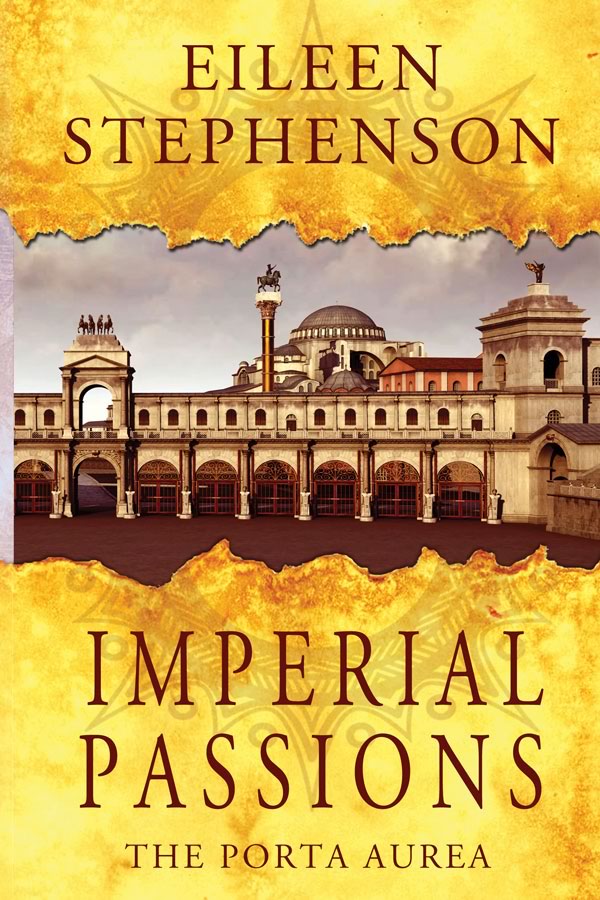 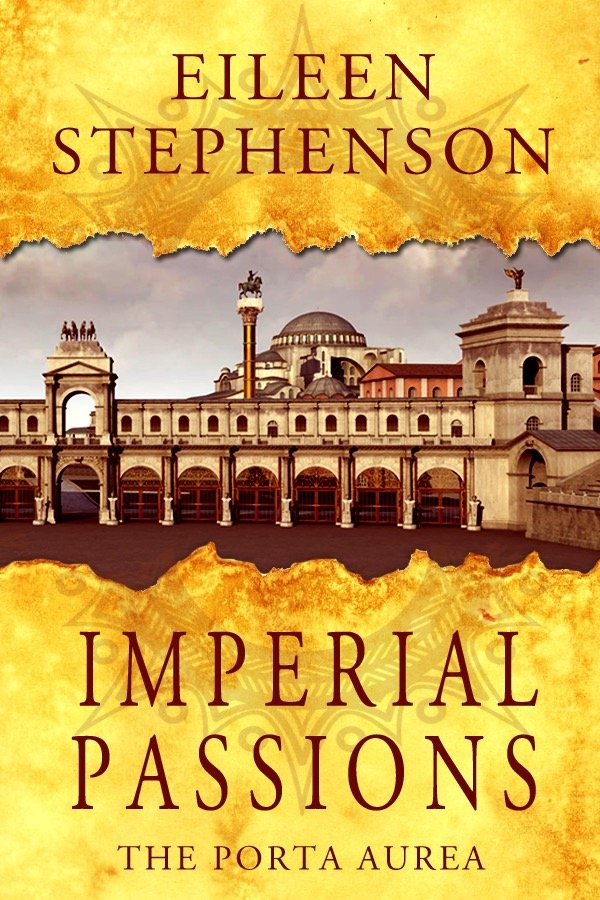 For those of you interested in 11th century Byzantium, here is an excerpt from my novel, Imperial Passions – The Porta Aurea. This scene takes place in the church of the great monastery of St. John Stoudion. The monastery was not far from the Porta Aurea (Golden Gate) of Constantinople. It marks the end of the 5 – 6 month reign of the young and foolish Byzantine Emperor, Michael V Kalaphates. The historian Michael Psellus described this incident in some detail in his Fourteen Byzantine Rulers history.

To find the book on Amazon: https://www.amazon.com/Imperial-Passions-Porta-Eileen-Stephenson-ebook/dp/B07CMQPDWV

Setting the scene: The Constantinople populace began rioting, outraged at the shabby treatment Emperor Michael V gave his adopted mother, the rightful Empress Zoe. Anna Dalassena and her grandparents went to the Monastery of St. John Stoudion where Anna’s uncle is a monk. They hoped to escape the commotion until it died down, not realizing they entered the eye of the storm.

The End of Michael V Kalaphates

“The emperor is here, with his uncle Constantine. They are with the hegoumenos. They’ve begged for sanctuary, and to be tonsured as monks. They sailed from the palace to our dock a little while ago.”

Grandfather swore under his breath. Suddenly, the sounds of the angry mob were close and I turned to see an immense number of people swarming up the street that had been empty only moments earlier. Uncle Simeon looked over my shoulder, his usual calm gone.

“Theotokos help us,” he prayed, then pulled us in before barring the gate. “Come with me. I’ll put you in an alcove in the church. It should be safe there. They won’t dare desecrate the sanctity of the church.”

Uncle Simeon secured the gates to the monastery before turning us all towards the church. I grabbed hold of Maria and Alethea’s hands and we raced through the gardens towards the archway that held the door the monks used. We’d been in the church many times before, but always from the visitors’ entrance, never from the monks’. Uncle Simeon rushed us through a back corridor and up steep stairs to a gallery overlooking the nave. He glanced over the railing, then gasped.

“They’re here,” he whispered, looking towards a few figures we could see through the entrance in the iconostasis.

That time of day, the gallery was in shadows, hiding us while we could see all that transpired below.

The man I had seen proudly attired in imperial purple just a day earlier, was now in the plain robes of a monk, his head pink where he had just been tonsured. Another man stood near him, also pink with the tonsure, but a beardless eunuch. They were pleading for protection from the Hegoumenos, Matthias, their hands grasping the altar.

The door to the church crashed open below and a voice called out, “They’re in here.” The rabble rushed in while the two new monks frantically grabbed the altar, crying out “Sanctuary! Sanctuary!” repeatedly. I thought the people would seize the men at that moment, but the hegoumenos raised a hand.

“Stop! Stop! Not one step further, you are in the house of God. I will not have you desecrate it with violence.” Matthias, a soft-spoken elderly man, would have had better luck trying to stop the waves from lapping on the shore than to deter this mob.

A couple of the larger men pushed the sputtering hegoumenos to the other side of a door near the altar, shutting it and ending any further monkish interference. Uncle Simeon, up in the balcony with us, was the only monk to witness to the retribution dealt the two miscreants.

One of the men in the crowd, with light brown hair that poked out at odd angles, a beaky nose and receding chin, and wearing the garb of a palace official, pulled away from the mass of people and began berating first Constantine, and then Michael for their sins against the empress. The two men cowered, hands gripping the holy altar.

“Was there anything she ever did that could have justified your cruel treatment?” Looking directly at Michael, his angry rebuke continued, “The empress is your adopted mother and has been only kindness and generosity to you. I saw it with my own eyes. And this is how you repay her? With baseless accusations and imprisonment?”

The crowd surrounding them cried out in assent to these statements, shaking fists and waving swords at the two figures clinging to the altar.

The beardless one began stammering a reply, pointing a finger at Michael. “It was him—I couldn’t stop him. I tried to but he would’ve killed me.” He gibbered on, lapsing into incoherent sobbing excuses for what had happened.

The one who had been emperor gaped at his uncle’s efforts to absolve himself from any blame. He started to speak, looked around at the crowd and thought better of what he had planned to say, then began again.

“It is true, I sinned against my kind mother, the empress.” Michael stopped and gulped hard, looking around to gauge the impact the admission had on his listeners. “But I’ve repented and taken the holy vows and tonsure, as I deserve for my wickedness. My kind mother has told me she forgives me. Please, please have mercy.” With that, he bent his face to the altar and rested his cheek against it, almost daring the mob to pull him off.

The rabble was slowed by this speech of repentance, but not stopped. The anger and outrage throbbed through the air, thirsting for blood. A few men with spears jabbed their weapons at the two, sometimes pricking the skin and rousing the crowd to greater frenzy as bloody cuts appeared. I heard one woman call out to finish them off.

Suddenly, two soldiers entered with about twenty of the Varangian guards. I recognized among the Varangians the tall blonde guard called Harold who three years earlier had escorted my family to our ship and exile. Grandfather whispered that one of the men was Constantine Cabasilas, the one who had gone to bring Zoe’s sister, Theodora, back from her convent.

In the fading light I tried to see who the other man with the Varangians was. His shape looked familiar when I realized with a shock that it was John Comnenus.

Cabasilas ordered Michael and his uncle to leave with him, that the new empress Theodora had ordered it, Zoe conveniently forgotten for the moment. All eyes were on the sobbing men gripping the altar, and I moved out into the little remaining light in the church that came through the windows. John had been speaking to some of the Varangians when my movement caught his attention and he saw me, eyes widening in disbelief. Grandmother pulled me back into the shadows.

“Didn’t you see him? That’s John down there with the soldiers,” I whispered urgently to her.

“I don’t care who it is, we need to stay hidden until this mob is gone,” her voice edgy at my recklessness.

Michael and his uncle were steadfastly refusing to leave the altar, but none were ready yet to physically remove them from it.

Cabasilas tried another way to remove them willingly from the church, but I think he was lying when he spoke.

“I swear by the Holy Relics of the holy St. John of this Church, and by the Theotokos, that you, Michael, and you, Constantine, will come to no harm, by order of the Empress Theodora. But you must leave with me now,” he concluded.

It did no good; they still refused to be moved from their sanctuary. At that, Cabasilas lost all patience. He nodded at the leaders of the mob. The two men were pulled from the altar and dragged, screaming desperately, out to the street in their new monk’s robes, sick fear in their cries.

I turned to Grandmother, shaking at what I had witnessed. Her pale face was as shocked as mine. The church grew quieter as the crowds surged through the doors back to the open area outside. Almost without realizing it, we were drawn like iron filings to a magnet, turning to look through the windows at the front of the church down at the scene below.

The mob poked and taunted Michael and his uncle, making ribald jokes about the old eunuch, nicking them with their swords, spinning them around until they fell, weak kneed and dizzy, into a heap. Damp spots on their robes showed the fear they felt. Suddenly a beefy man appeared carrying a brazier with several pokers sticking out of it.

“Phillip, welcome, we have been waiting for you so this party can begin,” Cabasilas said with sick humor.

It seemed Michael’s uncle recognized the man before Michael did, and let out a horrified moan before falling into an unnatural silence, resigned to his fate. Michael took a few more seconds before he, too, realized the inevitable. Yet he, instead of accepting the punishment as his uncle did, fought frantically, if unsuccessfully, against it. Several men took pleasure in restraining him with the occasional fist.

Phillip came up to the men with his instruments at the ready, the crowd closing in on them. The view from our vantage point was crystal clear.

Suddenly I heard the eunuch speak, “You there,” to Cabasilas, “make the people stand back, so all can see how bravely I bear my punishment?”

Cabasilas looked over the crowd before nodding and people spread back in anticipation of the gory show. The old uncle looked in vain for mercy, before lying down on the cold stones, ready for Phillip’s hot irons. Phillip started to bind his victim’s arms but Constantine stopped him.

“If you see me flinch, then nail me down. Until then, leave me as I am.”

With a shrug, Phillip took up the first of his hot pokers, touching close to first one eye of the man, and then the other. Constantine took his punishment bravely, not moving or screaming at all, despite the agony he must have felt. Michael, seeing his uncle’s now blind face, began wailing and struggling more. The grinning soldiers forced him to the ground and bound him more tightly. Still he writhed, trying to escape punishment, forcing more men to grab and hold him down. It was not long, though, before he shrieked like a wounded animal from the first wound.

Voices in the crowd muttered, “Got what he deserved,” and “Piece of horse shit,” and “Dug up your bones.” Most approved what happened, but a few of the women fell back in shock.

Still they were not finished. Another anguished scream rose from the man who had been emperor, as the poker pierced his other eye. I stood mesmerized until the mob’s cheering broke the spell, and I turned around. Someone put his arms around me as Michael’s anguished cries echoed in the square.

The ghastly job completed, the mob dissipated like a morning mist on the Marmara. It had had its fill of blood and laughed in satisfaction at their accomplishments. Monks emerged from the monastery to tend the two blind men in the street, leading them to its infirmary to bind up their wounds.

I finally looked up and realized it was not Grandfather’s arms around me as I had thought, but John’s. I leaned against him in relief, wiping my tears on his shirt.