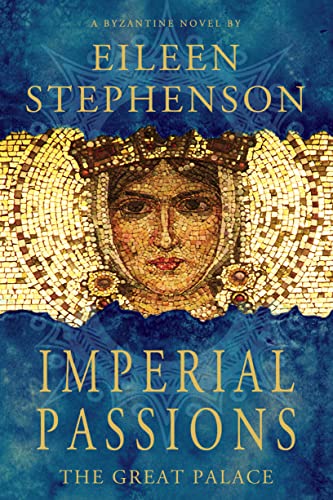 An epic story of love, power and betrayal in eleventh century Constantinople

Constantinople 1057. The magnificent Byzantine Empire continues to exist only because its enemies have not yet realized how years of corrupt rulers have weakened it. A new emperor, Isaac I Comnenus, seizes the throne expecting to reverse the decline but is overwhelmed by an empty treasury, a troublesome patriarch, and invaders at every border.

Isaac struggles against foes both in Constantinople and at the borders, while his brother John shrinks from his growing responsibilities to the dismay of his wife, Anna Dalassena. Anna’s disappointment in her husband is outweighed only by her horror at her enemy’s, Constantine Ducas’s, growing importance. Her husband’s reluctance and the turbulence of these troubled years finally forces Anna to recognize her own pivotal role in the destiny of the empire’s fortunes and that of her family.

This novel continues the story of Anna Dalassena, begun in “Imperial Passions – The Porta Aurea” which ended with Anna’s brother-in-law, Isaac Comnenus seizing the throne and becoming emperor Sept. 1, 1057 (happened to be Byzantine New Year’s Day). This new novel tells Anna’s story through the following twenty-four years until the time Anna’s son, Alexios I Comnenus, seizes the throne in April 1081.

The 11th Century was a tumultuous time for the Byzantine Empire, with Anna’s role in those events especially pivotal when circumstances were most dire. You won’t want to miss this story!

My husband is a big fan of maps in historical fiction, and I have to admit I am too. “Imperial Passions – The Great Palace” has events taking place all over the Byzantine Empire so I decided to include a map of the empire as of 1025, at the death of Basil II.

As I wrote the novel, it was startling to see visually just how much territory was peeled away from the Byzantines during the time from Basil’s death to the time when Alexios took the throne. By 1081, when he became emperor, they had lost all of Italy, much of Serbia and Croatia, Bulgaria was under constant threat, and most of Anatolia was in the hands of the Turks. In other words, there wasn’t much left!

I found a mapmaker, Julie Witmer, through another writer friend. She also happened to have worked as an archaeologist in the eastern Mediterranean, so she was familiar with the area. The map covers two pages in the book since the empire was so large in 1025. I hope you enjoy this map as much as I do.

I hope you’ll decide to purchase “Imperial Passions – The Great Palace.” If you do, be sure to check out this map at the start of the book (prior to Chapter 1) and the accompanying information about the state of the Byzantine Empire at the time the story takes place.