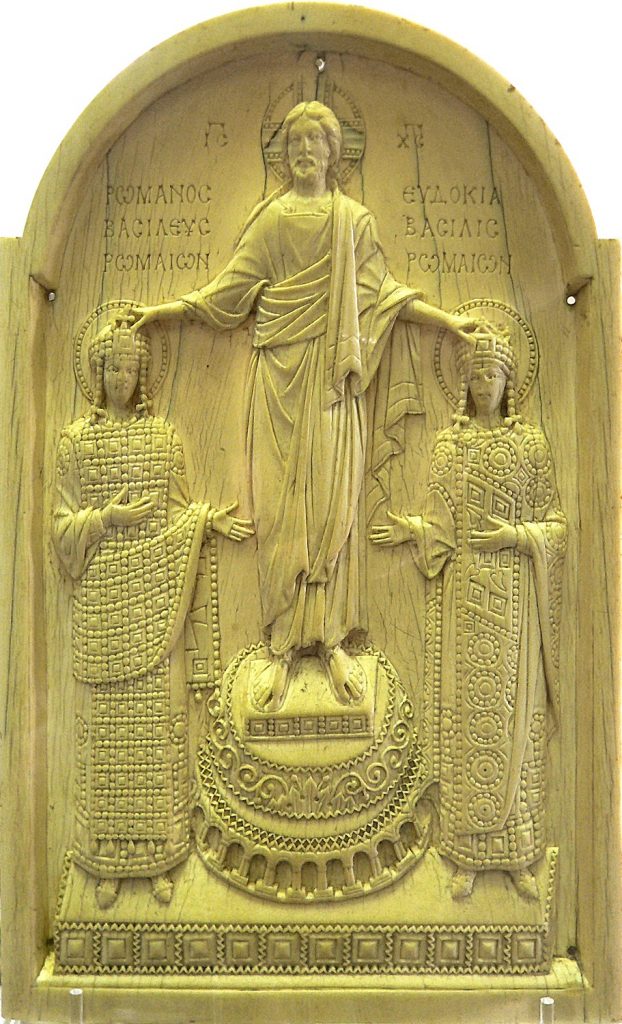 Eudokia Makrembolitissa is one of those individuals in history with many connections to other more famous people, but who are overlooked. Her mother was a sister of Michael Keroularios, one of the more renowned of Eastern Orthodox Patriarchs. She married two Byzantine emperors and was the mother to another. Despite all this, historians say little about her.

Let’s start with her birth year which I’ve seen it listed as 1021. However, she gave birth to two sons by her second husband, Emperor Romanos IV Diogenes, who she married in 1071. In the 21st century it is close to impossible for a 50-year old woman to give birth even once, let alone twice. It would have been a miracle of biblical proportions if a 50+ year old woman of the 11th century had managed to. I suspect Eudokia’s birth year was no earlier than 1031, and possibly later.

According to John Skylitzes’ history, in about the year 1040 Eudokia’s father, John; her uncle Michael Keroularios; and others (possibly including Constantine Monomachos) conspired against the Emperor Michael IV. John was stripped of his wealth and forced into a monastery – a common solution for rebels at the time. This would have left Eudokia and her mother close to destitute. Fortunately, their years of poverty were relatively brief. By the summer of 1042 Constantine Monomachos had married Empress Zoe. He soon elevated Michael Keroularios to be patriarch.

Eudokia married Constantine Ducas by about 1049, giving birth to her first child, Michael, in 1050. Ducas was a widower and senator, and if my estimate of Eudokia’s birth year is correct, about 25 years older than his wife. Still, they had seven children, six of whom survived to adulthood. Ducas supported of Isaac Comnenus when he seized the throne from Michael VI Stratiotikos in 1057. In 1059, Isaac designated Ducas as his successor when ill-health forced his abdication.

Emperor Constantine X Ducas ruled for about 8 years and died in the spring of 1067. On his deathbed he forced Eudokia to swear that she would never remarry. She became regent for her 17-year old son, Michael VII. Young Michael is a bit of a mystery. The age of 17 would not have been too young for a man of that period to take on the adult responsibilities of an emperor. Yet, no one ever suggested that Michael was capable of doing so on his own. Consequently, the responsibility for ruling fell entirely on Eudokia’s shoulders. Within a few months she felt the burden had become too heavy. She approached the patriarch asking to be released from her oath to her husband forbidding remarriage. He granted it.

Her choice for a second husband was Romanos Diogenes, who she married on January 1st 1068 (the carved ivory plaque at the top is of Christ blessing Romanos and Eudokia). The histories of the period say she met him for the first time on the day they wed. I doubt that. Romanos Diogenes’ first wife was the niece of Isaac Comnenus’ wife, Catherine. Romanos was a rising young general during the reigns of both Isaac and Constantine Ducas. It seems likely that two people with such close connections to Isaac I Comnenus would have met.

Unfortunately, the marriage of Eudokia and Romanos IV Diogenes was too successful. Eudokia gave birth to two sons during the next couple of years, Nikephoros and Leo. I suspect that those boys, more than girls would have been, were a problem for her first husband’s intensely loyal brother, John Ducas. He would have seen Romanos likely favoring his own sons as successors over John’s nephew, the pathetic co-emperor, Michael VII. John took steps to remedy that situation – steps that were disastrous for Eudokia, Romanos, and the empire.

In the summer of 1071 Romanos IV took an army on campaign against the Turks encroaching on the empire’s eastern borders. Included in his army was a son of John Ducas, Andronikos, as well as mercenaries such as Roussel de Baliol (see The Missing Story tab). The Byzantines should have won the battle at Manzikert against the Turks near Lake Van on August 26th. Instead, Andronikos Ducas ignored Romanos’ instructions to join the battle at a crucial point. Andronikos told his soldiers that the Turks had killed the emperor and he retreated, riding back to Constantinople. The Turks defeated the Byzantines with Romanos injured and taken captive. This was a loss from which the empire never fully recovered.

Although the Turks released Romanos after about a week, he soon realized that he was no longer welcome in Constantinople. The Ducas clan had made sure to rouse the populace by blaming the emperor for the defeat. He gathered what supporters he could and tried to overcome the Ducas forces, but they defeated him, taking the emperor captive. John Ducas’ younger son, Constantine., despite his promise, had Romanos blinded in June 1072. In the process of blinding, Romanos contracted a terrible infection that killed him in a lingering and painful way on August 4, 1072.

Her son permitted Eudokia to give her husband a magnificent funeral but afterward soon retreated to a monastery. Emperor Michael VII was left with his uncle, John Ducas, now assisting with ruling. Eudokia’s monastery stood at the Hellespont (now the Dardanelles, near Gallipoli), far from the capital of Constantinople where she had lived her life. Although she may have lived many more years, there is no record of her past the year of Romanos’ death.