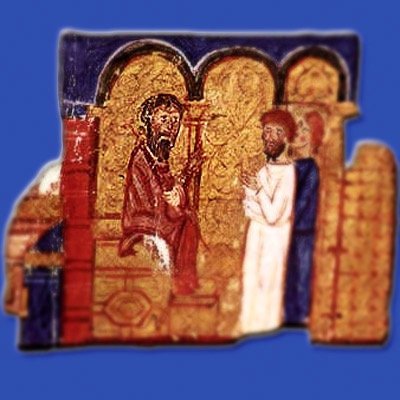 Michael Keroularios was one of the more unusual of Eastern Orthodox Patriarchs. Born around the year 1000 in Constantinople, he became an Imperial bureaucrat.

John Skylitzes’ history mentioned Keroularios receiving the tonsure in 1040, along with his brother-in-law, John Makrembolites (the father of another of my Lesser Known 11th Century Byzantines, Eudokia Makrembolitissa). This followed an attempted rebellion against Michael IV the Paphlagonian and Michael’s brother, the hated and feared, John the Orphanotrophos. Some sources suggest that the bureaucrat Constantine Monomachos (later to be Empress Zoe’s third husband) was also part of this conspiracy. Psellus wrote that the conspirators planned to put Keroularios on the throne if they succeeded.

Most of the Eastern Orthodox Patriarchs I’ve read about appear to have been deeply religious men who spent their life in the church. They may have sought to influence politics on occasion, but they did not become as politically involved as their brothers in Rome were. Keroularios, who had had the tonsure forced on him, was a different kind of monk.

Michael Psellus wrote that Monomachos told him he did not know Keroularios prior to naming him patriarch. Whether or not they knew each other, the Emperor Constantine IX Monomachos did name Keroularios Patriarch in 1043. One would think that elevation to such an esteemed position would satisfy the ambition of any medieval Byzantine man, but not Michael Keroularios.

Monomachos and his patriarch were usually on good terms. However, Keroularios refused to support the emperor’s efforts to conciliate with the Roman pope and get his help in maintaining the empire’s Italian holdings. The patriarch would have none of it. His arrogant and rude treatment of the pope’s emissary contributed to the loss of the Italian territories.

Even worse, it also resulted in the Great Schism between the Orthodox and Roman Catholic churches. It appears that (among other things, including a few religious points) Keroularios felt that the pope, in a poor and almost deserted Rome, was insufficiently deferential to the wealthier and more powerful patriarch in Constantinople. The pope’s emissary, Cardinal Humbert, made matters worse with his own intolerance and arrogance, so both sides contributed to the mess.

Monomachos died in January 1055 and the elderly Theodora, the last surviving member of the Macedonian dynasty, succeeded him. Keroularios made known his unhappiness about this situation – no woman could rule alone and she should marry. Theodora was in her 70s and had lived through worse. She remained unwed, and ignored the patriarch for the almost two years she ruled.

Theodora’s successor, the bureaucrat Michael VI Bringas, did not make Keroularios any happier. Perhaps they had had a disagreement when both served in the imperial bureaucracy, but nothing made it into the history books. In any event, the new emperor treated Keroularios even more dismissively than Theodora had. The new emperor would come to regret that attitude. The patriarch happily joined the conspiracy to remove Michael VI after less than a year on the throne. The patriarch’s involvement in the conspiracy tipped the scales into General Isaac Comnenus’ favor.

Keroularios’ key support of Isaac I Comnenus’ successful overthrow of Michael VI led him to expect that he would easily control and influence Emperor Isaac. Isaac, however, had to manage with an almost empty treasury after years of frivolous spending. Also, the need to rebuild the military against attacks from Turks, Pechenegs and Normans was urgent. Isaac decided one of his solutions was appropriating gold, silver and land from the wealthier monasteries. Keroularios disagreed and relations between emperor and patriarch deteriorated.

Matters came to a head when Keroularios officiated at the Divine Liturgy in the Hagia Sophia one day. He wore the purple shoes that only emperors could wear, which was a terrible insult to Isaac. Rumors swirled that Keroularios had designs on the throne for himself, or possibly for Constantine Ducas, the husband of his niece Eudokia Makrembolitissa. Soon after that incident, Isaac’s soldiers arrested Keroularios on his way to a monastery outside the city. The soldiers bundled him onto a ship and sent him into exile on a distant island.

Isaac demanded that Keroularios resign his position as patriarch, but he refused. Isaac was about to try him on a charge of heresy when he died. This ended the life of the only patriarch that I know of who ever had designs on the Byzantine throne.

This is an abbreviated version of the complex political situation that existed in 11th century Constantinople. Alliances were fluid, ambitions were guiding principles, and loyalty was scarce. Even so, Michael Keroularios’ story was unique among the patriarchs in Constantinople during the 11 centuries of the Eastern Roman Empire.