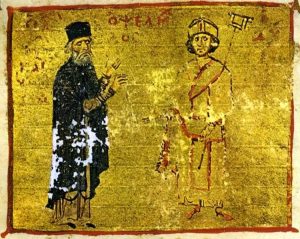 This is the second of three posts on Michael Psellos and his impact on medieval Byzantium.

Michael Psellos, the quintessential Byzantine bureaucrat, began his career in the imperial justice system, working in Anatolia in the 1030’s. Eventually, he became a secretary in the Great Palace during the reign of Michael IV, climbing to the top of the political ladder.

His “Chronographia”, popularly known as “Fourteen Byzantine Rulers” describes Byzantium’s rulers of the first 75 years of the 11th century. Basil II was the only one he never met although Psellos did recall seeing him in a parade as a child. Amazingly, in a feat I have no knowledge of ever occurring elsewhere, he managed to serve the remaining thirteen emperors or empresses, generally in high level positions until the early 1070’s. This would be equivalent to someone being in a high level in the US government in every administration from Harry Truman’s to Donald Trump’s.

How does someone accomplish that? Difficult to know from this distance, but it likely involved the usual political activities of groveling, pandering, and flattery.

Given the speed with which the throne turned over, sometimes with Psellos’ nudge, it is worthwhile examining some of the changes in which he participated.

Young Michael V succeeded his uncle, Michael IV, as emperor sitting beside Empress Zoe. Michael IV’s brother, the eunuch John the Orphanotrophos, engineered the succession to keep the throne in their family. The Orphanotrophos was a smart man, politically savvy, and vicious to any perceived enemy. However, Michael V had little affection for the older man and banished him to a remote Greek island where he died.

Without the Orphanotrophos’ advice Michael V soon blundered in his quest to be the sole ruler. He decided to exile Empress Zoe to a monastery on the island of Prinkipo in the Sea of Marmara. The city’s populace loved Zoe and rebelled. They rioted, forcing Michael to quickly abdicate and enter a monastery himself.

That was not enough for the mob which located this foolish young man, dragged him outside of the monastery, and blinded him. Where was Michael Psellos as all this was happening to the emperor he had served? At the front of the rioters, loudly berating the erstwhile emperor for his disloyalty to Zoe. Psellos’ “Fourteen Byzantine Rulers” includes a vivid description of the whole sorry end to Michael V.

Like Psellos himself, Michael VI was an imperial bureaucrat. He managed to get himself designated as the successor to the elderly Empress Theodora when she died in August 1056. However, he quickly alienated the military leadership which was in open rebellion by the summer of 1057.

Isaac Comnenus, the leader of the rebels, defeated Michael VI’s forces in August 1057. In desperation, the emperor sent a delegation that included Psellos to negotiate with Isaac so that he could keep his throne. At the same time, the rebels’ partisans in the city were pushing Michael to abdicate, which he did on August 31, 1057.

What of Michael Psellos? The man who left the city to negotiate on behalf of one emperor, somehow managed to ingratiate himself with the next emperor, Isaac I Comnenus, and returned to the city as one of his chief advisors.

This was not an imperial regime change, but rather a religious one. Michael Psellos never worked for Patriarch Michael Keroullarios but he certainly turned his coat when doing so benefitted him.

Keroullarios apparently made some unfounded allegations against Psellos during the reign of Constantine IX Monomachos. These resulted in the bureaucrat temporarily leaving for a monastery to rebuild his reputation. Later, during the reign of Isaac I Comnenus, Keroullarios incurred that emperor’s wrath, who forced him to abdicate from the patriarchate. Psellos, now Isaac’s advisor, wrote the patriarch a letter dripping with sarcasm. He reminded the priest about how blind he had been about Psellos’ intelligence and his resistance to the bureaucrat’s many charms.

Fast forward a few years to the reign of Constantine X Ducas whose wife was the niece of the former patriarch. Ducas asked Psellos to write a Funeral Oration for the late patriarch which can only be described as rapturous. This lengthy document praised the patriarch to the heavens, finding nothing objectionable about him.

You have to wonder what was going through his head when he wrote the oration.

Isaac I Comnenus and John Comnenus

Isaac I Comnenus ruled for just over two years before suffering health problems that forced his abdication. His brother, John Comnenus, had the title of “Caesar” which indicated he should have succeeded Isaac. Psellos himself was the only historian present when Isaac made his choice for successor. The “Chronographia” only states that Isaac passed over his brother and other family members for Constantine Ducas. We can only guess what else went on in that sick room. However, Psellos states that he was Ducas’ closest advisor for the whole of his reign.

Romanos IV Diogenes married the widow of Constantine X Ducas, Eudokia Makrembolitissa, becoming co-emperor with her son, Michael VII Ducas. Michael was a woefully inept eighteen-year old whose mother was his regent. She married the accomplished general after realizing she could not handle ruling the empire alone.

Psellos chides Romanos in his history for often disagreeing with his advice, including on military tactics. However, the new emperor had the years of military experience needed to campaign against the ever-encroaching Turks. Romanos might have benefitted from political advice, but with Psellos’ true loyalty to the Ducas clan and Michael VII, he would not have received it from the bureaucrat.

The contemporary historian and judge, Michael Attaleiates, had great respect for Romanos. However, he noted that there were many in Constantinople who worked to undermine the new emperor’s rule. This would have included Psellos and the rest of the Ducas clan, specifically Michael VII’s uncle, the Caesar John Ducas. I expect the Ducas unhappiness with Romanos grew when he and Eudokia had two “born in the purple” sons. Those boys would have been competitors for the throne with their Ducas half-brothers.

History does not record what involvement Psellos may have had, if any, with the Ducas clan’s disastrous betrayal of Romanos at Manzikert in August 1071. It seems likely, given his elevated position in the government and loyalty to the Ducas family, that he would have had at least some peripheral participation in it.

The Ducas family took full advantage of Romanos’ defeat at Manzikert. They threw him off the throne, before capturing and quickly blinding him. As Romanos lay dying from the horrendous infection he received from the blinding, Psellos sent him a disgusting letter congratulating him on the loss of his eyes.

With Romanos gone, Psellos must have thought he was in the best position he could be as the emperor’s loyal former tutor. Instead, young and foolish Michael VII decided to rule on his own. His chief advisor was not his uncle, the Caesar John Ducas, or Psellos, but his new favorite, the greedy young eunuch Nikephoritzes.

Although still respected in some circles, Psellos was soon a political non-entity suffering a severe loss in prestige. Ironically, if Psellus had helped the doomed Emperor Romanos avoid the Manzikert catastrophe he might have remained in his position of influence at court. Instead, his last betrayal ended up bringing about his own betrayal.