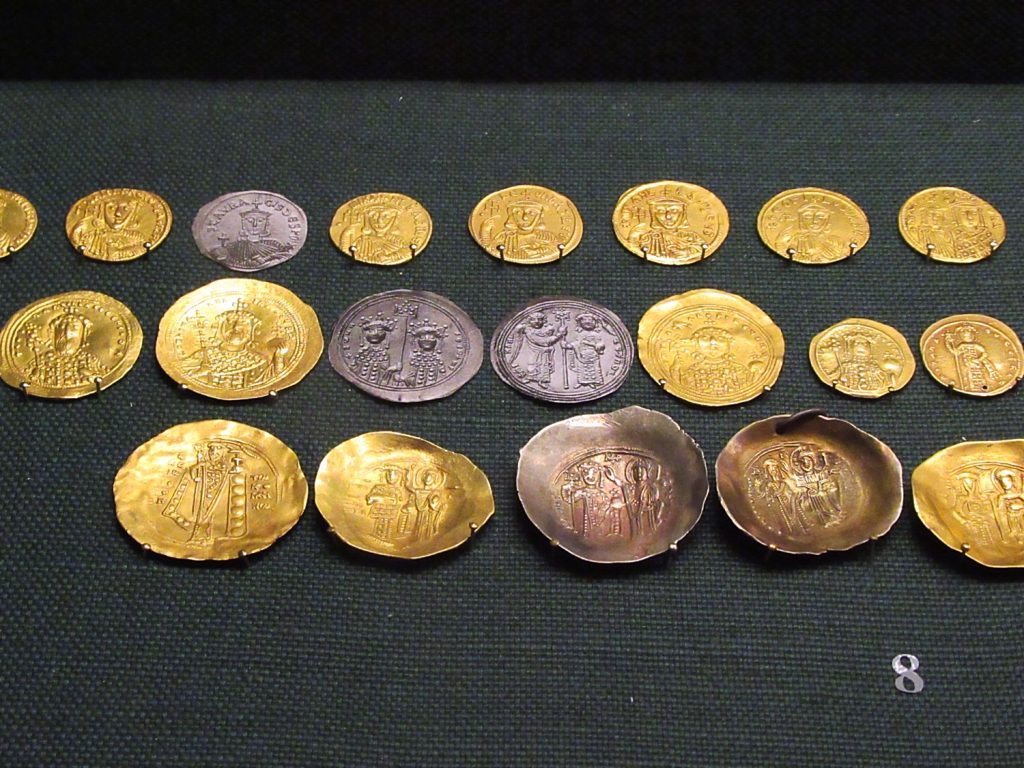 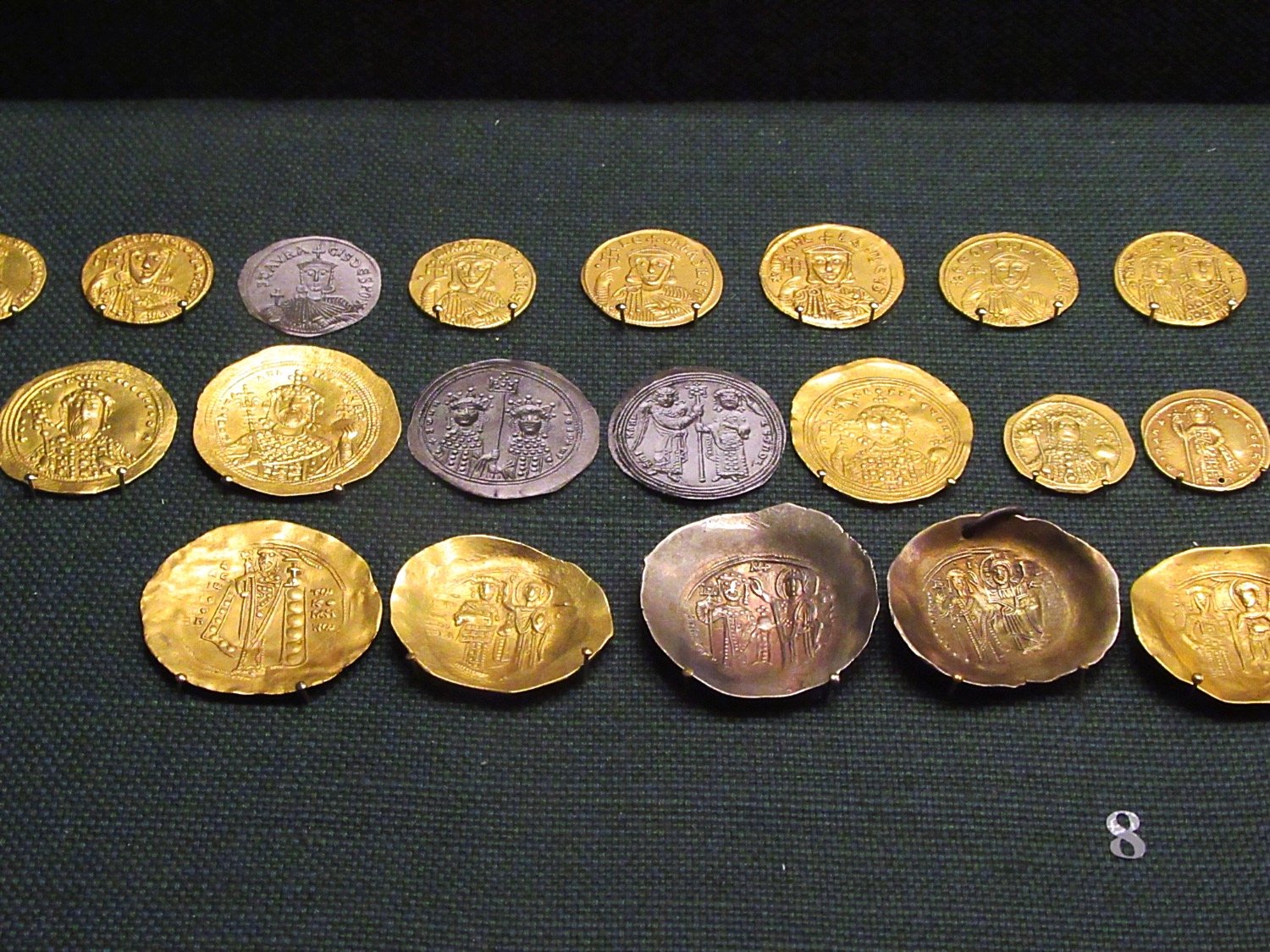 Above: coins from the Byzantine & Christian Museum in Athens, Greece.

Few would argue against calling economics the dismal science. I’m not sure it is a science so much as wishful thinking, especially when it comes to the predictions economists make. However, my day job is in the finance industry, with economics often a topic of discussion. Inevitably, I began to contemplate the 11th century changes in the empire’s fortunes, connecting it with its money problems. How did fiscal mismanagement lead to military disaster, and then to fiscal catastrophe? A tidy book, The Byzantine Economy, by Angeliki E. Laiou and Cecile Morrisson (Cambridge Medieval Textbooks, 2007) clarified matters.

I have written about my judgement of Emperor Constantine IX Monomachos in my blogs. (https://eileenstephenson.com/the-turning-point/) The three contemporary historians, Michael Psellus, John Skylitzes and Michael Attaleiates, each attested to his spendthrift habits. He showered money and gifts on his favorites and those whose support he needed to stay seated on the throne. The historical record also reports that he spent inordinately on many new buildings in the city. The worst example was the Church of St. George Mangana and its ancillary buildings (palace, hospital, old age home for soldiers). In fact, he started the church of St. George and half-way through construction found it insufficiently grand. He tore it down, building an even more magnificent structure and a cost we can only imagine.

All this building cost a fortune. Michael Psellus wrote that Constantine IX spent money as though it were from an unending spring. Basil II left the empire with an incredibly full treasury when he died in 1025, and the treasury earned more everyday from taxes and trade. Still, this profligate ruler spent it all and then some. [In my novel, Imperial Passions, I make some guesstimates about where some of the cash came from. Of course, I have no proof to support my guesses.]

Devaluation of the Gold Standard

One unquestioned way he dealt with the situation was to devalue the gold nomisma. The coin had been the gold standard (the “bezant”) throughout the world for centuries with its gold content between 90% and 98%. These prized bezants have been found as far east as Japan and as far north as Scandinavia, a testament to their value.

Constantine IX died in January 1055 after 13 years on the throne. A chart on page 154 of The Byzantine Economy provides insight into what happened to the gold content of the nomisma (also called solidus). It fell from 95% gold, first to between 80-90%, before slipping to just above 70% in the 1050’s. As I mentioned in previous blogs, the many vanity projects built during his reign necessitated cutbacks in military funding, especially in the empire’s borderlands. The immediate impact on the empire was negligible. Eventually, though, enemies – Pechenegs, Normans, and Turks – realized Byzantine military readiness had deteriorated and took advantage of it.

Over the next sixteen years, the nomisma’s value held steady in the 70% range of gold content. All that changed in 1071 with the devastating effects of the Battle of Manzikert.

Manzikert was a battle the empire had the manpower to win and would have won but for the lethal political battles in Constantinople. I have written about the terrible consequences of “take no prisoners” politics in that (or any) time in earlier blogs. Suffice it to say that the Seljuk Turks defeated the empire and soon swarmed throughout Anatolia, taking control of this rich territory.

The empire lost tax revenues and the products that came from these lands – horses, food, mine products, etc. Almost immediately the value of the gold nomisma began falling, dropping almost half to 40% gold content by the end of that decade. There were similar devaluations of the empire’s silver coins done at the same time. The nickname of Emperor Michael VII Ducas from that time, “Parapinakes”, which means “minus a quarter”, was generous compared to what had actually occurred to the currency. Michael VII Ducas was unusually poorly suited to being a ruler and by 1079 he abdicated and taken himself off to a monastery. 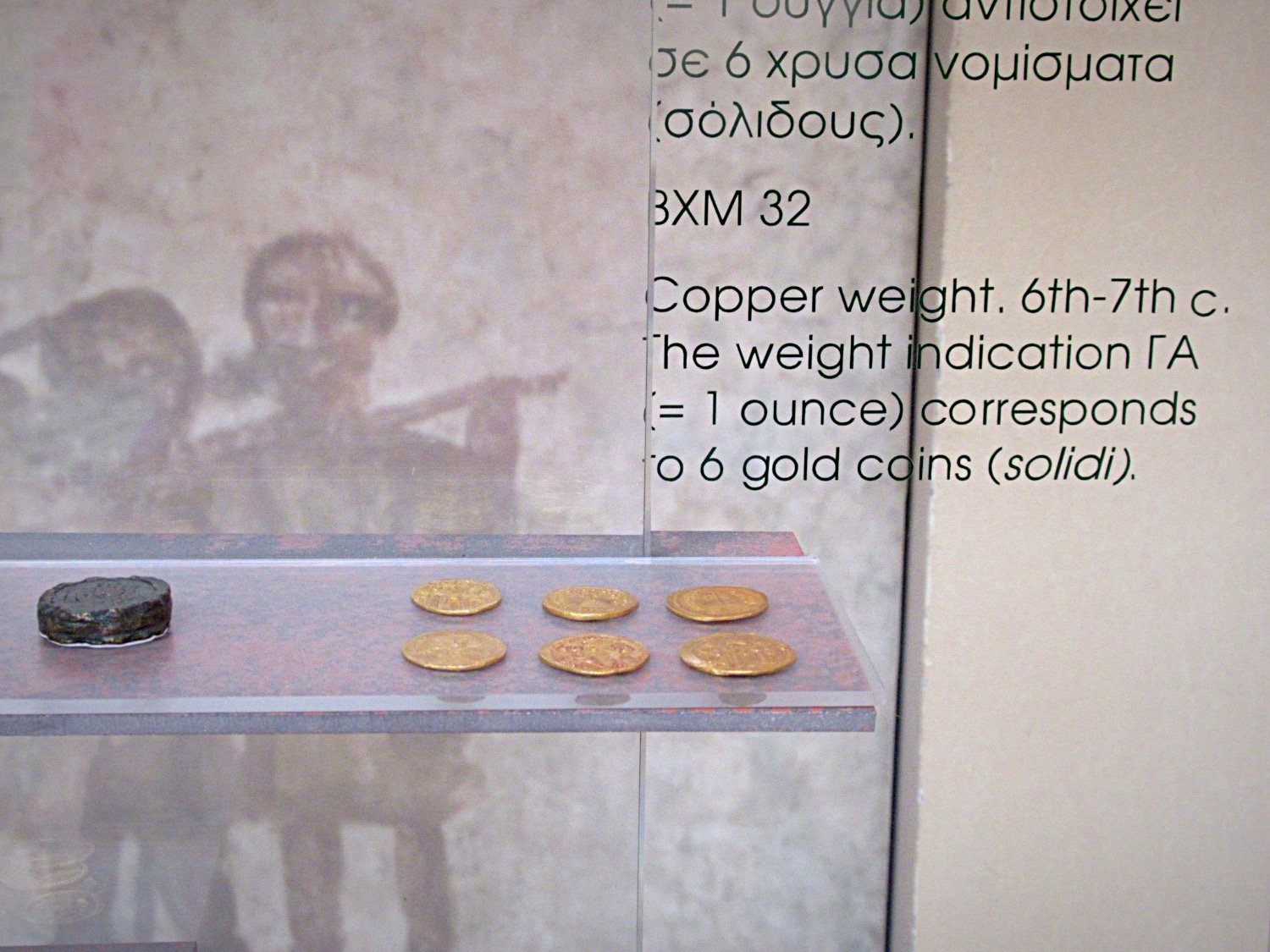 Proving the Value of Coins

Above is a photo I took at the Byzantine & Christian Museum in Athens. It shows the copper weight that merchants used to verify the amount of gold in coins. The above weight was equal to the weight of six gold coins or one ounce of gold. It was not uncommon in the Middle Ages for coins to have pieces of their precious metal shaved or cut off. Any merchant needed these weights if he wanted to stay in business.

These weights meant that merchants would quickly realize when the newest coins did not contain the same amount of gold as the previous coins did. Their appearance would not deceive a canny merchant. Historians of that period knew little about economics and made few comments about fiscal matters. Nevertheless, the devaluation of the currency immediate affected the populace, and a long-term impact on the prestige of the empire.

The value of the Byzantine currency fluctuated in later years, but never again reached a 90% gold content. Neither did the empire ever return to the same level of strength in enjoyed prior to the reign of Constantine IX Monomachos. A sad demonstration of how quickly the fortunes of a great empire can turn when ruled by incompetents.