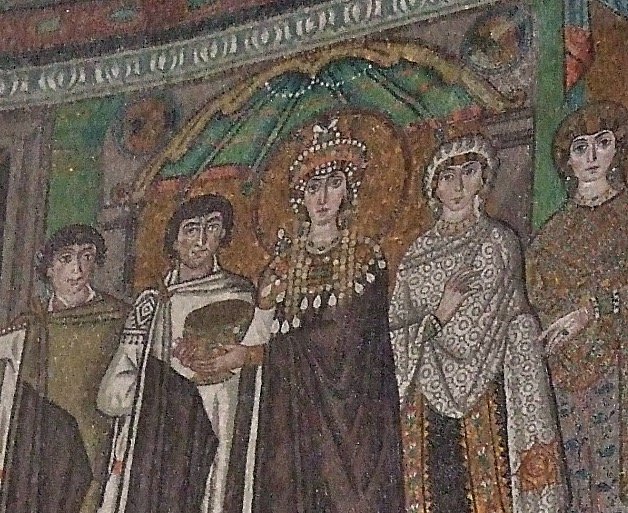 The Hagia Sophia is a treasure house of history – a building still standing and magnificent after 15 centuries. I could spend a week just examining its many parts and still find something new. But on my first visit I was especially interested in the green circle of marble in the women’s gallery where a thousand years of Byzantine empresses stood during the Divine Liturgy.

When you enter the Hagia Sophia, you are first in the outer narthex, a kind of vestibule. You then enter the inner narthex. To the left is the entrance to a ramp that leads up to the women’s gallery. The zig-zagging ramp seemed equal to at least 3 or 4 flights of stairs, and held openings for air to circulate. I thought on the long walk up the ramp that it wasn’t quite fair for the empress to have to walk that distance. However, our guide said sedan chairs carried the empresses up (no mention of how other women might have reached it).

The women’s gallery is a capacious area extending around three sides of the building and larger than most churches. The empresses’ spot was perfectly centered to face the iconostasis and altar. It’s a little off-center now that the mihrab is in place. The first woman to stand on that spot was Theodora, the renowned wife of Justinian. Her picture is above in the famous mosaic in the church of San Vitale in Ravenna, Italy.

It is easy to imagine the other empresses over the 900 years of Roman rule who also stood in that spot. The parade of women who left their mark on the Byzantine civilization in one way or another. Many were Theodoras, Irenes, Zoes, Maries, and Helenas – the favored names for women of this era. The last empress to stand on that spot was Maria of Trebizond, the third and last wife of the John VIII Palaeologus, the next to last Byzantine emperor. Maria died of plague in 1439. The wives of the last emperor, Constantine XI Palaeologus, died before he became emperor. 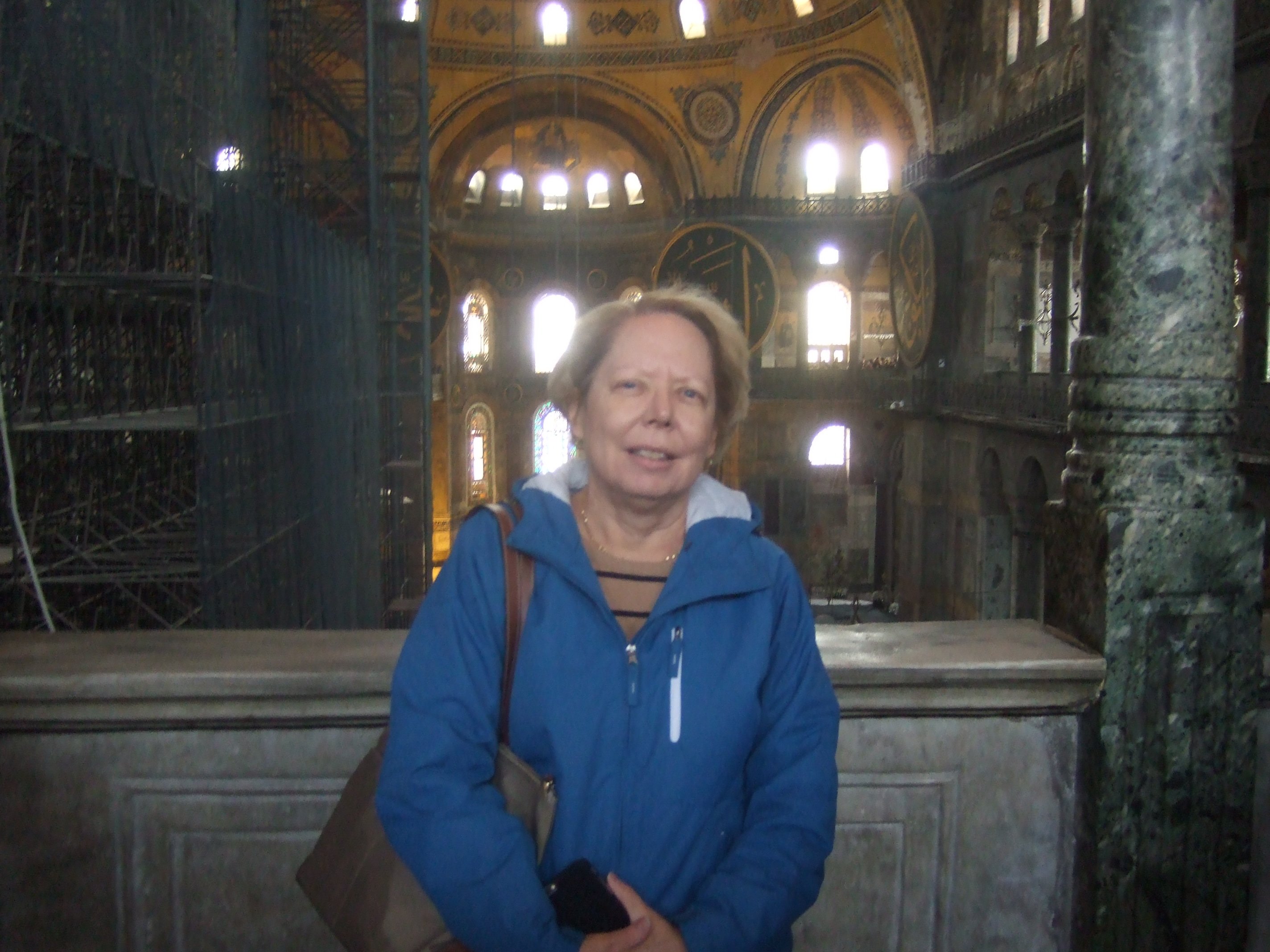 Standing Where Theodora Would Have Stood

Here I am, standing in the empress’s spot on a chilly March day. There was always a crowd surrounding it, so I was lucky to have the opportunity to be photographed here.

Don’t let the walk up the long ramp intimidate you – the sights in the women’s gallery level are so worth the effort. The museum’s most famous mosaics are on that level. Also, the runes left by roving members of Varangians are there. The block of marble embedded in the floor with the Venetian Enrico Dandolo’s name carved on it, handy for those of us still upset about the Fourth Crusade to stomp or spit on. 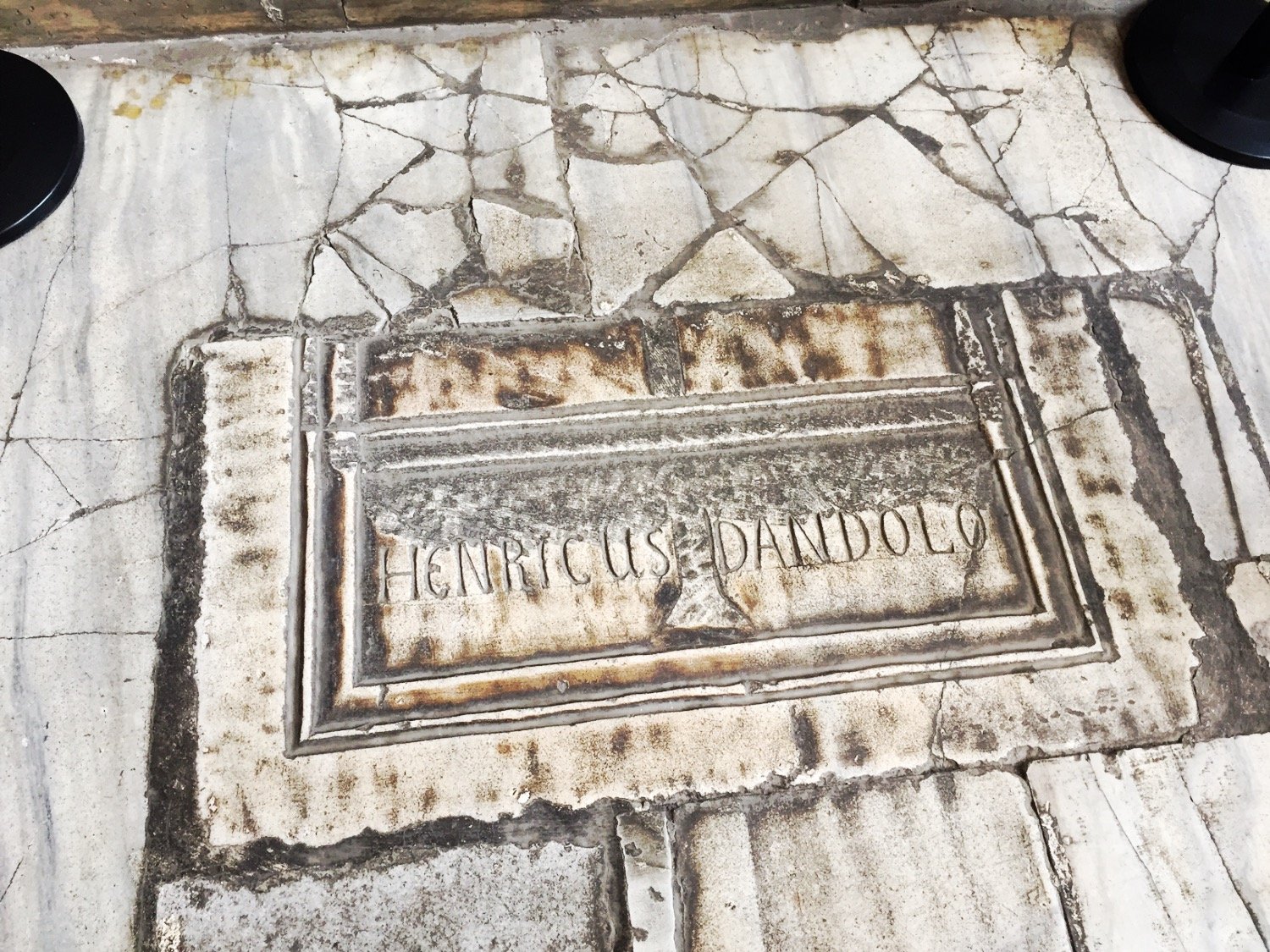