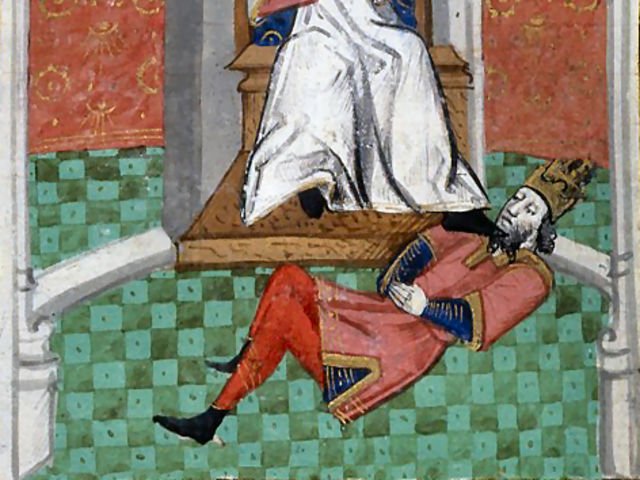 The Diogenes family first came to prominence during the reign of Basil II early in the 11th century. Constantine Diogenes rose through the ranks of the taghmata – the central armies under the control of the emperor- to become a successful general, important in Basil’s conquering of Bulgaria. Following Basil’s subjugation of Bulgaria, the emperor gave Diogenes responsibility for ruling Serbia and the Balkan area. Some years later, about the time Basil died, Basil named Constantine Strategos/Autokrator (military governor) of Bulgaria. In 1027, during the short three year reign of Constantine VIII, he repelled an attempted invasion by the violent and brutal Pechenegs.

A Series of Unfortunate Events

Constantine VIII died in 1028, leaving his daughter Zoe to rule, but with a new husband, Romanos III Argyros. The new emperor was the uncle of Constantine Diogene’s wife. History books give no explanation for why Diogenes rebelled (if, in fact, he did). The story was that he  conspired with Empress Zoe’s younger sister, Theodora, to seize the throne. Romanos III had both Theodora and Diogenes sent to monasteries as punishment. At the time, Constantine’s young son, Romanos, was little more than a baby.

Fast forward two years – Constantine Diogenes is accused of further plotting against the emperor. The emperor’s henchman, the Orphanotrophos, pulled Diogenes from the monastery and took him to Blachernae. There he threw himself from a window rather than implicate others under torture. (You can can read about the Orphanotrophus here: https://eileenstephenson.com/lesser-known-11th-century-byzantines-part-1-john-the-orphanotrophos-and-his-brothers/)

Maybe it was true, but some elements of this situation give me pause. First, it was at this time that the ambitious eunuch, John the Orphanotrophos, became the power behind the throne. Second, it was no secret that the Imperial sisters, Zoe and Theodora, loathed each other. Did the Orphanotrophos curry favor with Zoe, concocting a scheme to implicate Theodora? If so, Constantine Diogenes was just the collateral damage.

Third, the Orphanotrophos’ historical reputation is one that says he might have used a “suicide” by Diogenes as a warning to others. Expect this when you oppose him.

Fourth, suicide in this highly religious civilization does not seem common. In fact, I don’t think I’ve read of any other suicide in Byzantine history. Not that it didn’t or couldn’t have happened. The Orphanotrophos was nasty enough to inflict torture of sufficient brutality to make a prisoner consider it. Still, could “falling from a window” could really mean “thrown from a window”?

Arguably, Constantine Diogenes’s son, Romanos, had worse luck than his father did. He rose through the taghmata to become a leading general during the reigns of Isaac I Comnenus and Constantine X Ducas. By his first wife, he had a daughter and a son, Constantine. His wife had apparently died by 1067, since the historical record does not mention an impediment to his second marriage.

The second marriage occurred on January 1, 1068 soon after Romanos and Empress Eudokia Makrembolitissa met. The historical record says this was the first time he and the Regent for young Emperor Michael VII, his mother the Dowager Empress Eudokia Makrembolitissa, met. I find that hard to believe. Eudokia’s first husband, Constantine X Ducas, |supported Isaac I Comnenus when he took the throne. Romanos Diogenes was a relation of Anna Dalassena’s (Isaac’s sister-in-law). They may not have known each other well, but would surely have encountered each other from time to time.

This marriage between Romanos and Eudokia meant that Romanos was now the Emperor Romanos IV Diogenes. None of my favorite historians of the period (Psellus, Attaleiates, or Skylitzes) records anything about their marriage. However, it did produce two sons, the Porphyrogeniti Leo and Nikephoros, by August 1071 when Romanos left to fight Alp Arslan and the Seljuk Turks in Anatolia.

The Road to Manzikert

The political problem was that Romanos and Eudokia had two sons, not daughters. The boys had an equal or better claim to the throne as did Eudokia’s oldest son, the incompetent Michael VII. They were “Porphyrogeniti” – born in the Imperial purple marble room at the Great Palace. Eudokia gave birth to Michael years before his father became emperor. However, Michael’s uncle, John Ducas, remained loyal to his dead brother, Emperor Constantine X Ducas. He conspired to do away with Romanos rather than see his own nephew shunted aside for Romanos and his sons.

The opportunity presented itself at Manzikert, where his son Andronikos knew he had to ensure Romanos’s defeat. Andronikos received a note from Romanos ordering him to enter the fight, surprising the Turks. Andronikos would have ensured a Byzantine victory. Instead, he turned his troops toward Constantinople, saying the Turks had defeated Romanos. The picture above is of a famous incident where Romanos submitted under the foot of the victor, Alp Arslan at his defeat.

Matters went downhill swiftly for Romanos after that defeat. Within less than a year he lost the throne, his wife and young sons, his eyes, and, finally, his life. John Ducas’s son ordered the former emperor’s blinding. His eyes developed a terrible, painful infection brought on by the blinding, and he soon died.

Romanos’s sons fared little better. His oldest, Constantine, son of his first wife, died in Antioch about a year after his father, before his only child was born. This daughter later married into the Serb royal family. His son Leo with Eudokia was killed at 17 on campaign against the Pechenegs with Alexios I Comnenus. His son Nikephoros, a handsome boy who Alexios Comnenus raised in the Great Palace, served in the military. Later, though, he conspired against Alexios in 1094 to take the throne. The conspirators did not succeed.

Nikephoros, the son of Anna Dalassena’s cousin Romanos IV Diogenes, received the punishment of blinding. That was one of the few incidents of blinding during the Comneni era. Nikephoros was in his mid-20’s at the time. The record states that Anna Dalassena loathed blinding, but likely felt little choice. Without out it, Nikephoros would continue as a threat to her son, Alexios. Anna finally retired from court not long afterward.

All in all, the Diogenes family shot across the sky like a short-lived shooting star in the Byzantine firmament. They burned out after a few brilliant days in the 11th century Byzantine sun.