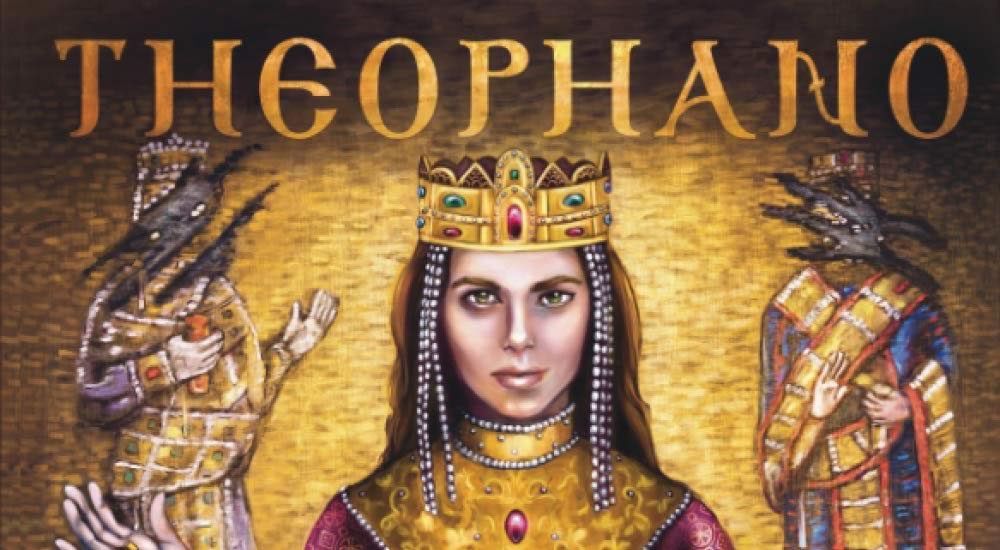 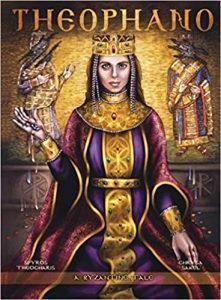 As many of you know, I am often on Twitter tweeting about all things Byzantine. Last summer when I was on Twitter I first became aware of  a new graphic novel, “Theophano: A Byzantine Tale” when the illustrator began mentioning it.  The idea of a graphic novel about the Byzantines was unusual, but I ordered a copy just to see how it was.

It was great! Wonderful illustrations and a story that kept close to the historical record. Theophano’s life was a Cinderella kind of story – the daughter of an innkeeper who caught the eye of the heir to the throne and married him. After that, her life became full of intrigue, murders, and palace politics – perfect novel material.

I asked Chrysa Sakel, the illustrator, for an interview, to which she graciously consented.

The book is available on Amazon in paper or for Kindle. Check it out!

Here is my interview with Chrysa:

Tell us a little about yourself.

My name is Chrysavgi Sakellaropoulou, but I use a shortened version of my name ‘’Chrysa Sakel’’ in both my artwork and social media. I was born in Athens and from a young age I have been taking art classes. Painting was something I loved doing.

For many years I focused on traditional art and exhibited my artworks in exhibitions around Athens, while working on my degree in Chemistry at the same time.

Was this your first foray into graphic novels?

Yes, ‘’Theophano’’ is my first serious attempt in creating an illustrated book with digital means.

After I graduated, I worked as a chemist, but I was determined to find some free time in my day to slowly work on this project with Spyros Theocharis, the author. Things got more demanding with time, so I had to leave my job and focus entirely on this project to finally finish it.

Can you tell me what inspired you to create a graphic novel about Theophano, a woman who lived over a thousand years ago?

I am a big fan of the Lord of the Rings movies and the Game of Thrones series. I noticed that many other people responded well to medieval inspired fiction. Spyros and I turned to the Byzantines and saw that there are many stories of that time that could be interesting even to those who don’t know much about Byzantium. One of those stories was Theophano’s.

Theophano’s life had all the elements we needed for this type of project.

What was the most difficult aspect (either written or artistic) of Theophano’s story to create?

We wanted to depict an interesting story, with as much historical accuracy as possible. That alone, for an illustrated book, was very challenging.

At first, while researching the historical validity of Theophano’s intriguing life, we found out that actually… the historical sources rarely mention her. Whenever they do, it is because she is accused of being involved in court intrigue. The mysterious deaths of emperors sparked rumors of poison and conspiracies in the women’s quarters of the palace. People  stereotypically considered poison a woman’s weapon, creating an intriguing tale.

I am not a historian myself so I can’t say what is the definite truth in the primary sources. But in my opinion, Theophano may have been undermined by the established reality of that time. She was a woman of scandalous beauty. That alone could be the reason why, in the eyes of the people, she possessed the same attributes as Eve who offered Adam the apple. But was she the kind of person the sources depict? Was she really involved in all these important deaths? We’ll never know for sure!

That problem of inconsistencies in the primary sources turned into an advantage for us. We manipulated the storyline to get the result that we wanted: A story of a woman whose motives and actions are defined by her self-interests and personal ambitions and a narrative of raw realism where we leave it up to the reader to think whether the protagonist is a hero or a villain.

Regarding the visual aspect, as an artist, I encountered many difficulties while trying to depict certain ceremonies and buildings that no longer exist. One example is the Church of the Holy Apostles. No description of how it looked remains, so I had to use my imagination and creativity in order to depict the second most significant church in Constantinople.

Did you discover anything surprising in your research for the book?

There were many surprising facts that we discovered while researching the story. I was amazed to learn that many Byzantine artifacts are held in museums and churches around the world. I included some of them in the graphic novel. One of them is the Limburg Staurotheke reliquary which was commissioned by Basil Lekapenos, one of the protagonists in Theophano.

An extra detail that stuck with us and which we also decided to include in the pages of the graphic novel, was the existence of a wall painting of Theophano standing next to Nicephorus Phocas. This wall painting has survived up to today and can be found in one of the Cappadocian cave churches, at a village named Cavuśin.

I really want to make more graphic novels set in the Byzantine world. That era is full of interesting stories which could be easily adapted into amazing graphic novels. The ending of Theophano reflects our thoughts on a sequel based on the most iconic Byzantine emperor, Basil II. I am tempted to start making research on some of the “big names” such as Alexios Komnenos or Justinian, but right now I’m focusing on ‘’Theophano’’. We are currently trying to make it available through more than one distribution channel. I hope that the readers will embrace this effort, so that we can invest more time in future projects.

With Theophano’s exciting life story, combined with Chrysa’s beautiful artwork, I can enthusiastically recommend to my readers that they add this graphic novel to their Byzantine library.

As always, please remember to review all the books you read on Amazon and/or Goodreads, especially anything about Byzantine history. That will help bring the Byzantines the attention they deserve!