What if Basil II had been a different Basil? 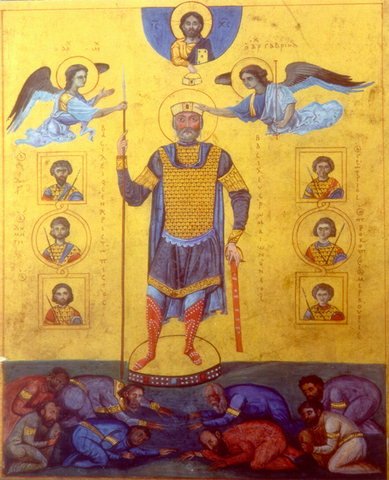 On this, the second weekend in July, a reminder of the Tomos Unionis, handed down for over a thousand years.

Basil II was one of the best known Byzantine emperors. He was the son of Romanos II, grandson of Constantine Porphyrogenitos, and great grandson of Leo VI the Wise and Romanos I Lecapenos. Basil had a highly successful military record, but did no succession planning. But what if the second Basil on the throne had instead been the youngest child of Romanos I, known to history as Basil the Parakoimomenos?

Romanos Lecapenos clambered onto the throne when turmoil between the regents of young Constantine Porphyrogenitos caused problems. Constantine’s father had gotten himself into trouble with the Patriarch for marrying four times so that he could finally get a son and heir. The Orthodox church then, as now, only permits two marriages – or a third if young children need to be cared for. But four was out of the question. That seems short-sighted to me, especially in medieval times when life was truly nasty, brutish and often short, but rules are rules.

Romanos needed the Patriarch’s support when he became co-emperor with young Constantine. The young emperor’s father had died several years earlier, but the Patriarch still seethed about father Leo’s non-canonical marriages. Romanos agreed that on the second Sunday of each July the priests in all Orthodox churches would read out the Tomus Unionis. This statement condemned and forbade having more than three marriages for an individual.

This reminder about marriage rules should have benefitted Romanos and strengthened his position on the throne. He had three legitimate sons that he made co-emperors with himself and Constantine. Surgeons castrated another legitimate son to ready him for the church and the patriarchal seat someday. Romanos also had surgeons castrate an illegitimate son, Basil. Romanos likely never married this child’s mother since this may have meant a non-canonical third marriage. As a usurper, he could not afford to lose the Patriarch’s support with a third marriage. Instead, he took a mistress who gave birth to a son, Basil.

Romanos’s most promising son, Christopher, was probably the child of his first (unrecorded) marriage since he was much older than his siblings. The historical record only reports his marriage to Theodora, who was the mother of Helena Lecapena (who Romanos married to Constantine Porphyrogenitos) and her brothers Stephen, Constantine and Theophylact.

Unfortunately for Romanos, the most promising of his legitimate sons, Christopher, died years before his father in 931. His sons Stephen and Constantine proved both stupid and disloyal – neither succeeding their father. On the other hand, the young eunuch Basil was intelligent, energetic, and capable. He eventually became the Parakoimomenos, or chief minister, to his brother-in-law, Constantine Porphyrogenitos, when he ruled on his own. He remained in that position with Nikephoros II Phokas, John I Tzimiskes, and his great nephew, Basil II.

A few years into Basil II’s reign, he threw his great uncle from this highest office, confiscated his lands and possessions, and sent the now 60 year old man into exile where he soon died.

Basil the Parakoimomenos has not received good press over the years and may have deserved it. The historical record is clear that he grew incredibly wealthy while in office. This often occurred with bright, capable, and ambitious eunuchs. I imagine he seethed with frustration at seeing others sit on the throne that he would have had if his parents had married. He probably saw his wealth as fair recompense.

How would this Basil have changed Byzantine history as a reigning emperor? Of course, it’s impossible to know. Perhaps the empire could have avoided the mess that occurred in the 11th century. For me, this is one of the great “what if’s” of Byzantine history.

PrevPreviousReview: The Road to Manzikert by Brian Todd Carey
NextThe Queen of Cities Does Not DisappointNext