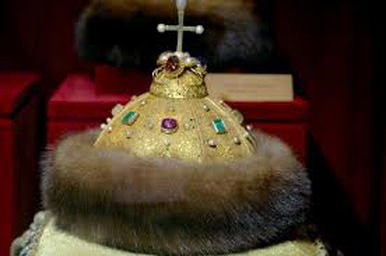 You never forget your first love. Mine was English history. At the age of 12 and living in Cleveland, Ohio, I knew the name of every English ruler back to Edward the Confessor. As an adult, I eventually moved beyond my childish fondness for England for a grown up passion for the Byzantines. Imagine my surprise when I realized that Byzantium and England had fateful interactions in the 11th century. Their pivotal battles, fought within a few years of each other, had consequences felt even today.

The pivotal battles were, of course, the Battle of Hastings in 1066 and the Battle of Manzikert five years later in 1071. William the Conqueror’s descendants still sit on the English throne. The Seljuk Turks’ win at Manzikert started a process that their Ottoman cousins completed in 1453. (See my blog on The Road to Manzikert: https://eileenstephenson.com/review-the-road-to-manzikert-by-brian-todd-carey/)

Harald Hardrada was probably the most important individual to impact both the English and the Byzantines in the 11th century. Cnut the Great, King of England, Denmark and Norway, defeated Harald and killed his brother in their attempt at the Norwegian throne. Harald eventually travelled to Miklagaard (the Norse name for Constantinople), spending eight years in the elite Varangian guard before returning home. He served the Byzantine throne during many of the turbulent years of the reign of Empress Zoe. He went home to Norway in 1042 an immensely wealthy man, becoming its king.

In 1066, Harold Godwinson succeeded Edward the Confessor as the English king. Godwinson’s brother and rival, Tostig, convinced Hardrada to support his rival bid for that throne. The Norwegian king and 10,000 of his men sailed to England. They won several battles before King Harold defeated and killed Hardrada and most of his men at the Battle of Stamford Bridge. However, the battle had so weakened Anglo-Saxon forces that William of Normandy defeated and killed Harold Godwinson at Hastings a few days later.

Harold Godwinson had a number of children survive him. One of them was a daughter, Gytha, who married Vladimir II Monomakh, Grand Prince of Kievan Rus. Vladimir’s maternal grandfather was Constantine IX Monomachus, the third and final husband of Empress Zoe. The poor girl was sent off to a barely beyond barbarian stage Rus prince from the magnificent city of Constantinople. Monomachus sent her off with an Imperial crown, a photograph which is purported to be that crown, is above.

Finally, the Battle of Hastings left more than a few Anglo-Saxon warriors with limited career opportunities in England. Many of them ended up in the Varangian guard – well compensated for their efforts and away from the Conqueror. Their opportunity for revenge came during the Battle of Dyrrachium in 1081 against the Norman adventurer, Robert Guiscard. They did well at the start, but eventually the Normans overcame them, slaughtering most of the Varangians.

This wasn’t the last interaction between Byzantines and the English. There is a Theodore Palaeologos, descendent of the last Byzantine dynasty and a Roundhead/Puritan during the English Civil War, buried in Westminster Abbey. 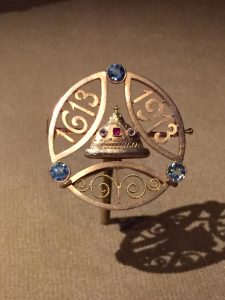 In 1913 the last Romanov tsar, Nicholas II, created this pin as an award. The pin includes a rendering of the Crown of the Monomakh in its center.

PrevPreviousThings the Byzantines have taught me.
NextReview: The Road to Manzikert by Brian Todd CareyNext