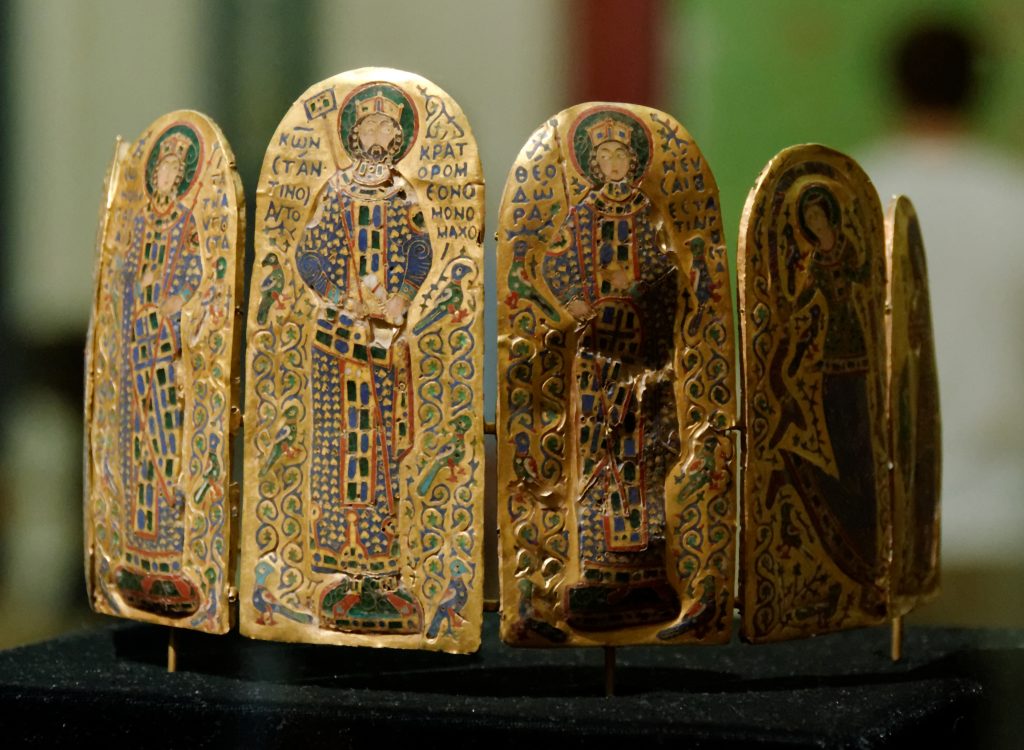 This is from an article I wrote for Byzantine Times magazine last year.

The Eastern Roman Empire lasted for over a thousand years before finally expiring in 1453. Many believe the turning point in its history, when it began its long decline, was the Battle of Manzikert in August 1071. In my opinion, Manzikert, while significant, resulted from problems  Constantine IX Monomachos began twenty-five years earlier.

Monomachos came from a family of wealthy bureaucrats in Constantinople although his father fell out of favor with Emperor Basil II. This deprived the handsome young Constantine of any high official honors. Around 1040 a cautious Michael IV exiled him to the island Lesbos when he caught Empress Zoe’s eye. She recalled that interest and following the death of Michael IV she settled on Monomachos as her third and final husband.

Monomachos thus came to the throne with neither military nor administrative experience. According to the historian Michael Psellus, Monomachos saw the throne as a “safe harbor”, a place of rest, involving no responsibility. He even managed to obtain Zoe’s approval to move his mistress, La Skleraina, into the Great Palace. Psellus, John Skylitzes, and Michael Attaleiates all commented extensively in their histories on the profligate spending of Monomachos. These included:

Vast sums of money and gifts for his mistresses and their families. Cash sent out of the empire to support the building or reconstruction of Greek churches. The Empresses Zoe and Theodora had their every whim indulged. Michael Psellus refers to Monomachos’s many building projects, of which the largest appears to have been the elaborate St. George Mangana church and complex. The old existing church in this spot was first torn down. A replacement building with a gold leaf roof and gem encrusted mosaics was built, but torn down when almost complete due to Monomachos’s opinion that it was inadequate. Finally, an even grander church and complex built. The list of his foolish spending is long.

Another great expense of Monomachos’s was putting down a number of rebellions. He could have prevented the rebellion of George Maniakes by not indulging his mistress and her brother. (See my blog: https://eileenstephenson.com/lesser-known-11th-century-byzantines-part-3-george-maniakes/) Difficult to say what caused Monomachos’s nephew, Leo Tornikios, to rebel, but there was likely little familial affection between them.

I suppose Monomachos cannot be blamed for the Rus invasion in 1043. He may even deserve some credit for preventing further invasions when he married his daughter to the Rus prince.

Michael Psellus, who expresses some fondness for Monomachos in his history, observed that the emperor treated money as though it came from a never-ending spring. The empire’s taxes and trade revenues were sizable, but still inadequate to meet the emperor’s demands.

The results of this over-spending included:

The debasement of the gold nomisma, after holding its value for centuries began in 1050.  In 1053 Monomachos began oppressive tax collection, imprisoning people as a way to squeeze more revenues from them. Also in 1053, he decommissioned 50,000 troops on the empire’s eastern borders in Anatolia since he did not have the money to pay them.

In 1054 the papal legate, Cardinal Humbert, visited Constantinople to smooth relations between pope and patriarch. Monomachos hoped to gain the pope’s support, and military support, to drive the Normans out of Byzantine territories in southern Italy. He gave the legate many generous gifts in this effort. Instead, the patriarch and cardinal clashed and the Great Schism between Catholic and Orthodox churches began. In January 1055 Constantine IX Monomachos died. That year also began the most severe Turkish incursions into Anatolia. They attacked individual towns and cities – raping, pillaging, killing and enslaving tens of thousands.

The throne was then held first by Empress Theodora, the elderly sister of Empress Zoe, with the elderly bureaucrat, Michael VI Stratiotikos, following her. Isaac I Comnenus rebelled against Michael VI, becoming emperor on September 1, 1057. By then the treasury was almost empty and he was forced to impose new taxes to refill it. The empire needed the money to push back the enemies nibbling at the empire’s edges. Ill health forced his abdication about two years later, with a string of mostly weak rulers following him. Unfortunately, the empire, even under Alexios I Comnenus, was never able to recover either the financial or military strengths it had before Constantine IX Monomachos began, as Michael Psellus said, to “exhaust the treasury of its money, so that not a single obol was to be left there”.

The photo at the top of this article is of Constantine IX Monomachos, with  his wife, Empress Zoe, on one side and her sister, Empress Theodora, on the other.